Ethylene is the simplest unsaturated hydrocarbon and is the first member of the alkene group. The first synthesis of ethylene compounds was done in 1795 by the Dutch chemist. The most important application of ethylene is the production of polyethylene. Ethylene is a flammable substance.

The name of the material (Persian language): Athena

The name of the substance (English): Ethen


Due to the binary bond in ethylene, this isomer is not formulated, meaning that the two halves of the molecule cannot change their formulation by rotating around the double bond. The ethylene has a flat building, the angle between the two carbon-hydrogen connections is 117 degrees. That is a smaller fraction of the angle of 120 degrees that is suitable for the sp2 hybridization. Nitrogen gas is a niche and a firefighter and is found in the combination of oil and natural gas. In 1795, ethylene was called the olefin gas. The first synthesis of ethylene compounds (dichloromethane) was carried out in 1795 by a Dutch chemist. In the mid-19th century, due to the fact that C2H4 was a low-C2H5-hydrogen hydrogen, the extensions (from the Greek root) to the end of the ethylene were added, and since then olefine gas is called ethylene. By 1852, ethylene was used in scientific texts. In 1866, the German chemist Hoffman founded the hydrocarbon naming system on the basis of Alcan. In this system, any hydrocarbons from the corresponding alkanes of two hydrogens are with the formula CnH2n and if the four hydrogens from the corresponding alkanes are low, is called CnHn. According to this naming, ethylene was renamed, Ethan. In 1892, the International Association of Chemists introduced the name into the IUPAC name, and from that date to the present, the name is used in scientific texts and textbooks, and so on. The molecular mass of this compound is 28.5 grams per mole and its density is 1.26 grams per liter. Its dissolution capacity is 250mg per liter of zero degrees water. Its melting point is 41.04 K and its boiling point is 169.4 and the explosion limit is 2.7 to 36% in air.

Uses: Ethylene is an essential raw material for the production of many organic compounds in the industry. Ethylene is widely used in the plastic industry. Polymerized ethylene produces polyethylene, which is a very important plastic. Repeatedly, it produces a polyvinyl chloride precursor (PVC). By combining benzene, it creates ethylbenzene, which is the main ingredient of polyester. Ethylene is a plant hormone that results in the emergence of fruits, the opening of blooms and flowers, as well as the fall of leaves in the autumn. Due to this property, it is used in agriculture. To prevent the deterioration of fruits such as apples, pears, and bananas, they are matured in transit or in the warehouse and placed under the influence of ethylene before reaching the market until it reaches. Production of polyethylene, ethylene oxide, ethylene dichloride, ethylene glycol, vinyl chloride, acetaldehyde are the most important applications of ethylene.

Ethylene is produced in the petrochemical industry by steam cracking. In this process, gas hydrocarbons and light hydrocarbon solutions from oil are heated to a temperature of 950-750 degrees Celsius. Generally, in the reaction of large hydrocarbons to small hydrocarbons, saturated hydrocarbons become converted to unsaturated hydrocarbons by losing hydrogen. The product of this reaction is a mixture of hydrocarbons, the most important of which is ethylene. Separate the mixture by compression and distillation except for the isolation. Other methods are hydrogenation of acetylene using a catalyst and dewatering of ethanol. Description of Process Diagram (PFD): Ethylene Production Diagram Chemical Reactions: Alkanes are involved in increasing reactivity due to dual bonding. Halogens react with ethylene and produce halo-ethane. It is produced by adding water to a double bond of ethanol, but the reaction speed without a catalyst is low. In the presence of metal catalysts such as platinum, nickel and ... and high-pressure ethylene, it is hydrogenated to become ethane. Ethylene is converted to acetate in the presence of peroxides, which is a cyclic mixture. Ethylene is polymerized to polyethylene in the presence of radicals that start the polymer reaction.

Ethylene does not irritate the skin and eyes, but contact with liquid ethylene may cause severe frostbite. Ethylene is highly flammable. 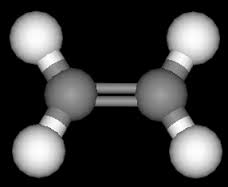